All aspects of our lives are now framed by 'daddy'. We see it in business, advertising, the military, that’s what colonialism was/is.”
By Frank Pizzoli

Writer and raconteur Kimberly Dark plucks the fig leaf off the patriarchy.

In The Daddies, writer and raconteur Dark excavates layers of man culture and custom that have saturated everyday life. As the NY Timesnoted “The so-called ‘dad style’ that has been adopted by all genders in recent years, it seems we’ve reached peak ‘daddy’.”

Dark’s allegory about patriarchy is told as a kinky lesbian daddy/girl love story filled with grief and social critique that will have readers exclaiming, “Oh, so this is why so many women, and an estimated 20-25% of cisgender gay men and lesbians, voted for Donald Trump!” (See p. XX - Gay men are increasingly voting for anti-LGBTQ right-wingers, says new study)

The story humorously follows a break-up between two adult lovers. However, the metanarrative is about our cultural need to break up the patriarchy, while still holding onto love for our fathers, sons and masculinity itself, Dark says. Daddy-ness now resides in all of us, she contends. And inasmuch as there are positive and negative aspects of the word used affectionately by children, and lustfully by gay men, lesbians and straight women, we all have a responsibility for creating a fairer world. To dissolve the negative aspects of “daddy” while encouraging affirmative love and care-taking. 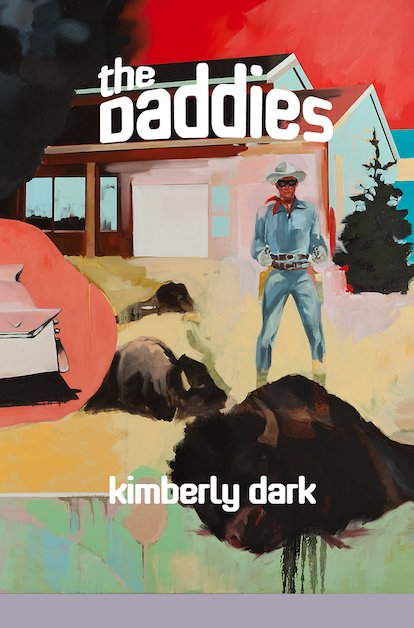 Windy City Times: Why publish a book at this time with this theme?

Kimberly Dark: I’ve published short essays on my incest experiences with my father and from that broadened my thoughts to the larger culture. The #MeToo movement has certainly opened a public dialogue on historical privileges granted men. The patriarchy is under scrutiny.

WCT: Hopefully we all listen more attentively to the “lived experiences” of others – women, people of color, non-heterosexual folks.

KD: Exactly. After sharing in print my incestuous relationship, I began turning over more cultural rocks. And under so many there are manifestations of “daddy”.

KD: Well, yes. We’ve become so used to the social narrative we don’t even question the patriarchy. Until now, of course. Certainly, there have been others in our history who have asked the tough questions, but not with an Internet to get out the word.

WCT: So, it may not be politically incorrect to ask, as I have, What is the value of women serving in the military, and now under certain conditions, in combat? Why is that progress if they join forces with the patriarchy?

KD: I think you’re asking the right question in the right way. We need to look at “mission”. What’s the end game? What are both men and women – straight, queer, whatever - doing with the resources, privileges, and each other? Can we, do we want to dissolve the negative aspects and daddy-ness and retain and encourage affirmative love and care-taking.

WCT: So, if a female, or anyone, of any sexual identity and/or race busts through the glass ceiling of a bank and joins her male colleagues of any sexual identity, or race, in denying loans to economically depressed others, she’s improved her life but not necessarily anyone else’s? She’s a daddy who can reward or withhold?

KD: Yes, that’s it. All aspects of our lives are now framed by “daddy”. We see it in business, advertising, the military, that’s what colonialism was/is.

WCT: It’s seems we live in a No Nuance world blended with Fire-Ready-Aim media. Is it wrong to ask if there must be more to LGBT civil rights than marriage and military service? Coincidentally, national queer organizations saw a quick 20-25% drop in contributions upon the U.S. Supreme Court’s marriage equality decision. I wonder if the queer Trump vote and these contributors are the same people.

KD: That’s the larger question. What do we sacrifice when the patriarchy allows us a place at the table? What if you don’t aspire to be heteronormative?

WCT: So, through your lesbian daddy/girl love story, not quite a heteronormative relationship, you tell a tale that weaves these broader themes into a narrative?

KD: That’s why I wrote in a hybrid narrative form, magical realism, with pop culture analysis.

WCT: Your thesis is a literary centipede. You needed many legs to move the story along?

KD: I did. And some sections were previously published as essays. When it all came together for me, I figured a way to tell a story but one that I could generalize to readers in a way they could think about their own experiences.

WCT: In that creative process, what surprises or deeper wisdoms did you conjure?

KD: I thought about what happens when you’re involved with someone kind of scary and you just can’t break up.

WCT: I’m certain many readers can relate to that scenario.

KD: Sure. Dominance and submission are often enjoyed in a relationship but may not be the singular nature of a couple’s bond.

WCT: Your character’s relationship is the micro version of your larger, macro story about ‘daddy-ness’?

KD: Yes. And within my characters’ relationship a reader can see themselves and also the larger picture of society. That’s what makes my book a political allegory.

WCT: Let’s explore both sides of that. Start with the characters.

KD: We make value judgments about the roles we’re asked to take in relationships. And I don’t mean only sexual roles. I mean someone’s overall posture when coupled. My characters act consensually, although some moments are dark as they evolve.

WCT: Do they learn about themselves in the process?

KD: They do. Yoga is the perfect analogy. Certain poses are demanding and when practiced you submit to the demands of the position. You adjust, learn, and your body incorporates the experience.

WCT: Like saying It hurts so good? But must we ask ourselves if that hurt is beneficial, growth producing in the long run, or simply abuse?

KD: That’s right. That’s why we need to make our own value judgments about what’s being asked of us in a relationship vis-à-vis daddy-ness. Control doesn’t always please nor is it always helpful or healthy.

WCT: Nothing eliminates a reader’s responsibility to think things through and decide?

KD: I hope that’s what the book points out. On the micro level of the relationship and the macro level of patriarchal culture.