Not only have I had one election in the last three years, I’ve had two. And I won both of them handily. So what part of the will of the voters are they ignoring?”
Oregon Governor Kate Brown (D)
By Alex Bollinger for LGBTQ Nation 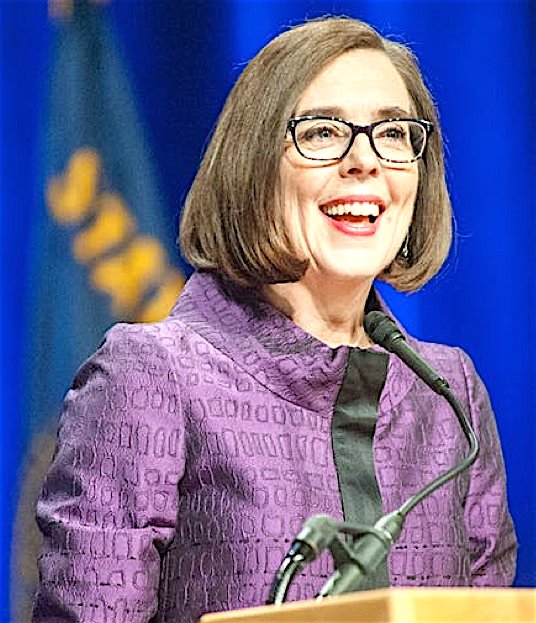 Republicans are attempting to recall the U.S.’s only gay and bisexual governors for the crime of enacting the agenda that they ran.

Republicans in Oregon are trying to recall out Governor Kate Brown (D), accusing her of doing nothing to enact the Republican Party platform. Brown identifies as bisexual.

Oregon Republican Party chair Bill Currier filed a recall petition against Brown. Usually recall elections are for politicians who are corrupt or commit crimes while in office. But Currier’s petition is about Brown’s policies instead. He cites policies she promoted on the environment, immigration, and civil rights as reasons to recall her.

“The people of Oregon deserve and expect a Governor that honors the will of the voters and works for the good of all citizens,” Currier said in the petition. He has not said whether he expects Republican lawmakers to enact the Democratic agenda while in office.

Two recall petitions have been filed with the @OregonSOS. This one is from the @OregonGOP. A spokesperson for the Secretary of State says it has been approved and is ready to circulate. They have 90 days to collect 280,050 signatures. #LiveOnK2

Republicans are also going after out Governor Jared Polis (D) in Colorado. Earlier this year, a recall petition was started. Republicans cited Polis’s policies on energy and guns as reasons for the recall instead of any accusations of wrong-doing. Polis was the first out gay man elected as Governor of a state.

Karen Kateline, a radio host who is working on the recall effort, told the AP that Republicans aren’t abusing the recall.

“Nobody is putting the brakes on these people,” she said, referring to recall efforts against Polis as well as several state legislators.

GOP consultant Ben Engen has been reportedly holding training sessions for Republicans in Western states to help them recall Democrats so that they can possibly be replaced by Republicans.

One tactic he teaches is to submit the petition at the correct time in order to trigger a winter recall election, when unaffiliated voters are less likely to turn up at the polls but conservative demographics are more likely to.

If successful, these recall efforts would remove the only two out governors in the U.S.

“Not only have I had one election in the last three years, I’ve had two. And I won both of them handily,” Brown told the Huffington Post. “So what part of the will of the voters are they ignoring?”

We Must do MORE Tour is coming

Students take their message to Toomey